Quilting is like breathing…I get cranky when I can't do it!!

Last weekend, while I was sick, my husband helped me organize the rulers in my sewing room by mounting all of the hardware.  All I had to do was tell him where everything should go! 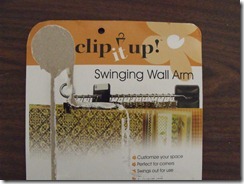 I bought two wall hangers for my longarm rulers from Simply Renee called Clip it Up.  They were initially designed for scrapbooking, but when I saw a photo on one of my quilting Yahoo chat groups where they had been used to organize the rulers, and immediately when I went to the site and discovered they were 50% off!  So of course I got two!

The first step was to take everything off the wall.  Boy, did I get a reality check on how many rulers I actually own!

Deciding where I want anything hung on the wall, especially when it involves putting a hole in the drywall, is an absolute chore, and it takes me forever to decide!  DH always says “I can fix it if you don’t like it there’” but I never change my mind and pull them out.

Once he mounted the first one, I hung the nested circle set, and it took all of 10 seconds to decide to mount the second one right next to it.

I decided to move another hanging ruler organizer that was mounted over the sewing machine over to the cutting table area, too.  Then he installed several hooks in various places for those miscellaneous

items, and now I have a place for everything.  He even suggested that the larger rulers get hung on the wall in the stairwell, since I don’t use them that often and they’d be out of the way.  What a great idea!

I love that I can now see all my rulers!

My goal, besides getting everything off the floor, is to remember to practice with the longarm rulers so I will be more comfortable offering them as an option for my customer quilts.

I can even see all of the specialty cutting rulers for piecing that I have, too, and maybe I won’t keep searching for yet another method to make my half square triangles!  Maybe I’ll even start that spectacular quilt I’ve been planning.